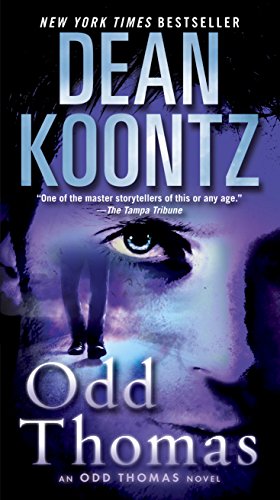 Like a pair of looms, using sunshine and their own
silhouettes, two enormous California live oaks wove
veils of gold and purple, which they flung across the
driveway.
Penny appeared to shimmer and to darkle  as  she
passed through this intricate lace of light and shade.

Now, that is someone who has a way with words.

I have read Odd Thomas at least twice and embarked on a third reading before starting this review. It is a book that stays with you, popping up in your head now and then. The language, as mentioned above, is lyrical in places, and yet grounded and down-to-earth in the storyline. I am not going to go into too much detail of the plot, because–if you haven’t read it–I don’t want to spoil it. Here’s what I can say:

Odd Thomas is a 20-year-old short-order cook in a small California town. He has a beautiful soul mate, Stormy Llewellyn; an eccentric landlady, Rosalia Sanchez; a friend in the police chief, Wyatt Porter; and the ability to see ghosts.

He can also see bodachs, evil creatures that gravitate to violent deaths. He is the only one who sees these, which sometimes lets him help avoid tragedy–and sometimes not.

The story is part mystery, part horror, part fantasy–which is why I chose this blog to review it on. It doesn’t fit any mold well. Odd is living up to his name and carving a niche all his own.

This is an incredible book, and I think all authors should be required to read it just to see what a well-written book looks like. Of course, there are other well-written books…but I don’t know of many more compelling. Dean Koontz has a way of creating characters that stick with you for decades. Besides Odd Thomas (who has a series of seven titles devoted to his adventures) my favorites are the adventures of Christopher Snow in Moonlight Bay. (Though Amazon bills it as a trilogy and there are only two books I know of…where’s the third book, Dean?)

I think Odd and Christopher would be good friends if they met.

Odd Thomas was originally released in 2003. In 2013, it was made into a movie starring Anton Yelchin. He was perfectly cast. Anton brought to Odd the humor, the pathos, and the brave spirit embodied in the book. Tragically, he died in 2016, so there could never be a sequel without recasting the part. So, we’ll be content with one.

The movie translated the book to the screen brilliantly. There were a few characters that made me go “huh?” with their casting, but it didn’t diminish my enjoyment of the film. A lot of the dialogue is taken word for word from the text of the novel, and the cinematography brought to life the world of Pico Mundo in loving detail.

This is an excellent book, a wonderful series, and a grand film. I highly recommend all three.

Rie Sheridan Rose multitasks. A lot. Her short stories appear in numerous anthologies, including Nightmare Stalkers and Dream Walkers Vols. 1 and 2,  and Killing It Softly. She has authored twelve novels, six poetry chapbooks, and lyrics for dozens of songs. She tweets as @RieSheridanRose.
View all posts by RieSheridanRose →
This entry was posted in RieViews and tagged Christopher Snow, Dean Koontz, Moonlight Bay, Odd Thomas, reviews. Bookmark the permalink.